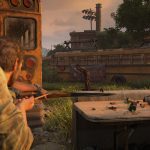 Previous Story:
The Last of Us Part 1 No. 5 in Sept. sales

Next Story:
Resident Evil Village to infect Mac this week