For the month, Elden Ring ranked as the No. 2 PS5 PSN download title in Europe. 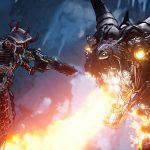 Next Story:
PSN Deal of the Week to conclude