Developed by Spike Chunsoft, Danganronpa: Trigger Happy Havoc Anniversary is a murder mystery investigation title in which the user must uncover a killer among a group of imprisoned classmates. 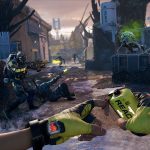