For the week ending Sept. 25, Death Stranding Director’s Cut ranked as the No. 11 best-selling title in the All Formats Chart. 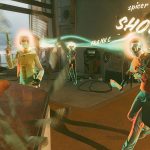 Next Story:
Deathloop PS5 No. 5 at UK retail