Halo Infinite to deploy in Dec.

Microsoft Corp. this week said Halo Infinite for Xbox Series X|S, Xbox One, and PC will be sold Dec. 8. 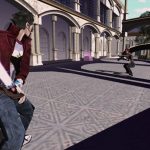 Next Story:
Mask of Mists drops to Xbox