The final game includes comic book-like hand-drawn backgrounds and animation, and local and multiplayer co-op for up to three players. 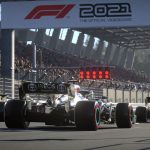