The Echoing Voids DLC, to be sold July 28, is the finale that takes place in the End. It will include new missions, new enemies, and legendary gear.

The DLC will launch in conjunction with a free content update to include new enchantments and the Gauntlet of Gales – a maze-like mission to include trials and puzzles.

Finally, Minecraft Dungeons: Ultimate Edition will be sold July 28. It will include the base game and all six DLCs – Jungle Awakens, Creeping Winter, Howling Peaks, Flames of the Nether, Hidden Depths, and Echoing Void.

Minecraft Dungeons is an action adventure title inspired by classic dungeon crawlers. It includes 3D, multi-level dungeons, and up to four-player co-op functionality.

The final game contains varied levels including canyons, swamps, and mines, in addition to new weapons and items to defeat enemy swarms. 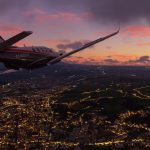 Next Story:
Microsoft Flight Simulator to drop to Xbox Series XS this week