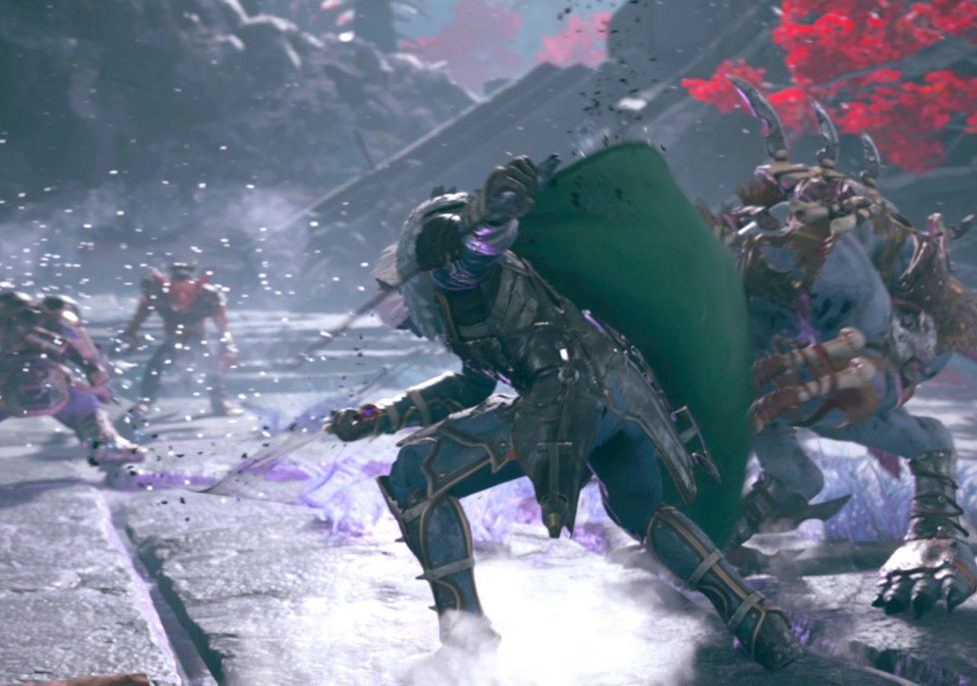 Developed by Tuque Games, Dungeons & Dragons: Dark Alliance takes place in Icewind Dale where the evil masses have formed an alliance to seize the crystal shard and rule the realm.

Four heroes have banded together to stop the dark alliance – Drizzt Do’Urden, Catti-brie, Wulfgar, and Bruenor Battlehammer. Each wields unique capabilities, skill sets, and gear that can be upgraded with found crystal shards and gold.

The combat is stiff, with user commands limited to forward attacks that negate enemy attacks from the side and back. Left and right camera movements are required to steer to user toward each enemy. A lock-on targeting system would help aid the rigid gameplay. Attack variety improves in later levels as users unlock new attacks and skills.

Enemy AI is sedated, with most ogres, dwarves, and sorcerers surprised or catatonic during battle. Enemy bosses are more reactive with plenty of knock back maneuvers to keep users engaged, but excessive stun animations can prevent proper evades and heals.

Level design is great in Dark Alliance. There are plenty of landscapes to traverse, each with optional paths to secure rare loot. The expansive castles and caverns are better for co-op sessions and a bit solitary for single-player mode.

The graphics engine is good at 60FPS for new consoles and mid-tier PCs. Frame drops and pop in can occur but hardly damage the gameplay. Music is minimal but orchestral and epic when it surfaces.

Online infrastructure is mixed with random disconnects and the inability to join a game in session. Xbox and PC cross-play worked as advertised in a co-op session using the Xbox Series S and PC rigs.

Dungeons & Dragons: Dark Alliance is a mediocre hack-and-slash action title that is worth a try on Xbox Game Pass. However, a full price investment to trek toward the perils of Icewind Dale is at your own risk.