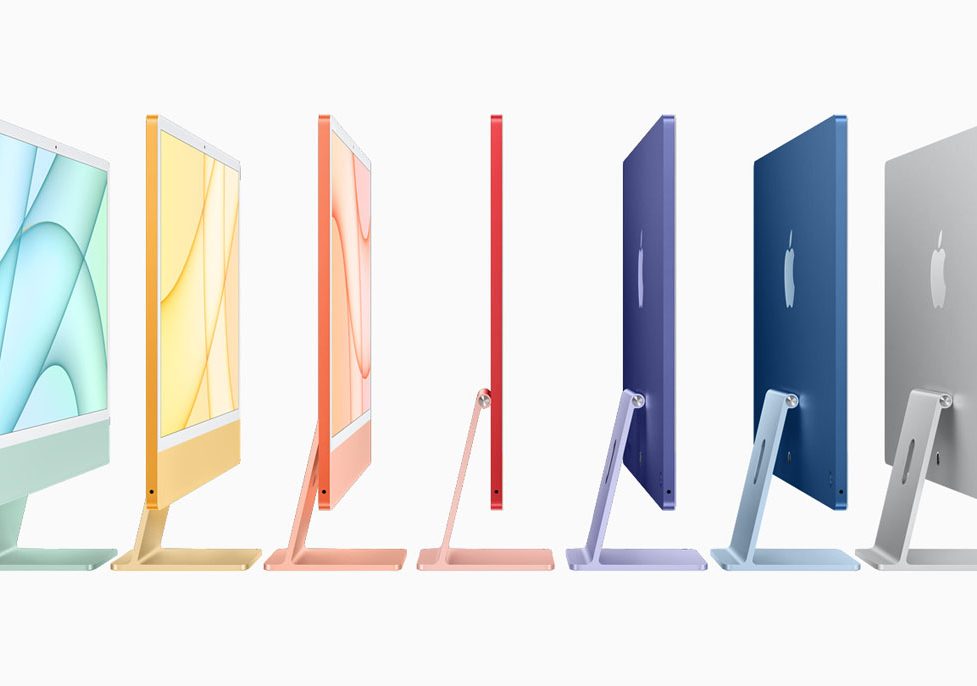 At less than 10 pounds, the iMac M1 is solidly statuesque. The full metal chassis includes a super-thin 11.5m, 24-inch display and the stand sports a small footprint to allow the computer to fit anywhere in the home. The Silver color wields a glossy grey chin made even cleaner without an excessive Apple logo, while the stand and monitor back include a matte metal finish. It’s a design made possible entirely by the M1 chipset, which resides below the display, leaving the rest of the space for the monitor and heat sinks.

The M1 chipset is a marvel. The system-on-a-chip integrates the main CPU, GPU, and RAM in a single unit with impressive performance that best many rival Intel CPUs both in speed and heat dissipation. The base model, which includes an 8-core CPU, 7-core GPU, and 8GB of unified RAM, is a beast. Whether browsing, 4K video editing, streaming, or cloud gaming, the iMac fan never turned on. It’s just all very impressive.

iPhone integration is fantastic on the iMac. Phone and FaceTime calls can be answered from the desktop, Notes and Calendar appointments sync automatically, and AirDrop makes photo and video transfers between phone and desktop effortless.

Because the M1 is ARM-based like A series chips, the new iMac is fully compatible with iPhone and iPad apps. Unfortunately, they are few and far between in the macOS App Store. Entertainment apps like Netflix and Disney+ are absent, as are many banking apps that could utilize Touch ID.

The 24-inch 4.5K Retina display is remarkable. The most premium component in the computer doesn’t disappoint with brilliantly sharp and colorful 4K video and great text readability. The six-speaker sound system, housed next to the M1 chipset, is good quality but not exceptional. While the force-cancelling woofers add some base, the down-firing sound is ultimately limited by the narrow chassis.

The built-in 1080p FaceTime camera and three-microphone array are substantially better than most integrated solutions. The camera uses the M1 Neural Engine to enhance image quality and reduce noise, while the microphones capture a fuller (though somewhat hollow) sound.

Macs have hardly been gaming machines but the M1 does show promise with its integrated 7 to 8-core GPU solution. In addition to a library of Apple Arcade titles, users can install Steam to play a number of popular games at around 30FPS.

There are a few drawbacks that may prevent customers from investing in the latest iMac. The base model includes only two USB-C / Thunderbolt ports with no option for video input. In addition, the base model only includes 256GB SSD storage, hardly enough for storing photos and video files. Finally, the 4.5K Retina display lacks touch functionality, an odd omission when the M1 is fully compatible with iOS and iPad OS applications.

With the M1, the iMac is a complete solution for most computer users. It can handle both basic and complex tasks, provides a good camera and mic setup for work-from-home or remote school work, and holds a stunning display for watching 4K content. Lack of ports and base storage aside, the iMac stands a poised and powerfully competent personal computer.