In addition, customers can purchase each title at up to 85 percent off. 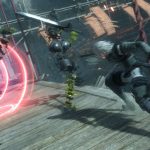