New titles released in Apr. include Marvel’s Avengers, Borderlands 3, and The Long Dark. 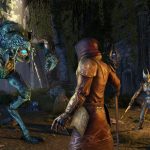 Next Story:
The Elder Scrolls Online to be Optimized for Xbox Series X|S