Pyra / Mythra from Xenoblade Chronicles 2, to be sold in Mar., can alternate between two forms and perform trademark attacks from the RPG franchise. 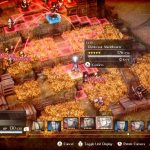