Injustice 2 is a fighting game sequel to Injustice: Gods Among Us.

It will be released Jan. 7. 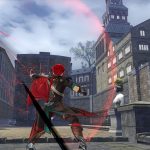