For the month, Watch Dogs: Legion ranked as the No. 3 best-selling title based on dollar sales. 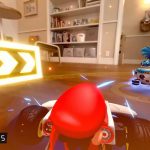