The retailer disclaimed that it will offer additional pre-order sales for PS5 consoles online the evening of Nov. 11. 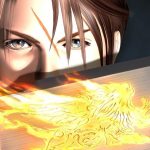 Next Story:
Halo 4 to deploy to Xbox Game Pass, PC this month