Activision Publishing, Inc. this week will release the Game of the Year update to Sekiro: Shadows Die Twice for Sony Corp.’s PlayStation 4, Microsoft Corp.’s Xbox One, and the PC.

The free update, to be released Oct. 29, will include new boss challenge modes, player recordings, and unlockable skins. 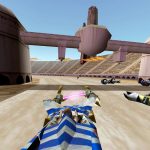 Next Story:
Star Wars Episode 1: Racer to drop to Xbox One this week