DOOM Eternal is the latest installment in the first-person shooter franchise.

New enemies include reimagined demons from classic DOOM titles including the Arachnotron.

Finally, demons are destructible with weapons able to take out chunks of armor. 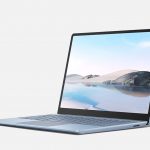