At Amazon.com UK, the Xbox Series X and Xbox Series S ranked as the No. 1 and No. 2 best-selling products in the Video Games division. Both consoles held a sold out status at the website this week. 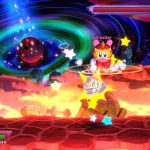