Wasteland 3 is a squad-based RPG and Double Kick Heroes is a shoot-em-up rhythm game. 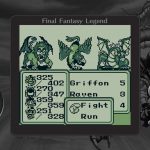 Next Story:
Xbox One sells 24 units in Japan Aug. 23 data