Final Fantasy VII Remake, released Apr. 10, is an action RPG based on the 1997 release. 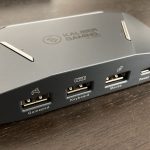