SAVE DATA • XBOX ONE

Microsoft Corp. this week is holding the WB Publisher Sale for the Xbox One and the Xbox 360 at the Xbox Live division.

The sale discounts select titles at up to 75 percent off. 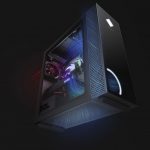