Microsoft Corp. this week will release Fallout 76 for Xbox Game Pass for Console and PC.

It will be released to the Xbox Game Pass for Console and PC July 9. 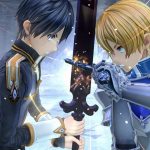