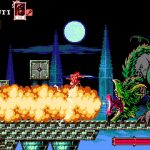 Next Story:
Bloodstained: Curse of the Moon 2 to summon PS4, Xbox One, Nintendo Switch, PC