New titles include The Bard’s Tale ARPG and Thronebreaker.

The Bard’s Tale ARPG (Console and PC) is a remastered action RPG. Thronebreaker (Console) is a single-player RPG set in the world of The Witcher. 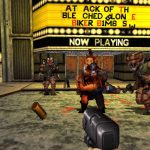