The Jungle Awakens DLC, to be sold in July, will include three new missions, new weapons, armor and artifacts.

The Creeping Winter DLC will be sold in 2020.

Finally, the title will receive cross-platform functionality and new free content at a to be determined date.

Minecraft Dungeons is an all-new action adventure title inspired by classic dungeon crawlers. It will include 3D, multi-level dungeons, and up to four-player co-op functionality.

The final game contains varied levels including canyons, swamps, and mines, in addition to new weapons and items to defeat enemy swarms. 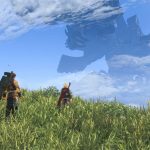