Trials of Mana is a 3D remake of the Seiken Densetsu 3, released in 1993 in Japan. The original title is included in the Collection of Mana. 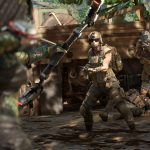 Next Story:
Xbox Game Pass drops Deliver Us To The Moon