For the week ending Apr. 11, Final Fantasy VII Remake ranked as the No. 1 best-selling software in the All Formats Chart. 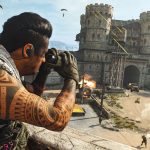