The trailer previews 3D, multi-level dungeons and up to four-player co-op functionality.

The final game is said to contain varied levels including canyons, swamps, and mines, in addition to new weapons and items to defeat enemy swarms. 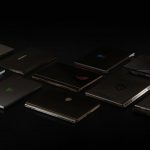