Amoeba Battle is a real-time strategy game in which the user controls amoebas to battle against infection. 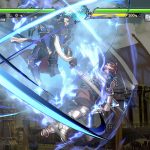