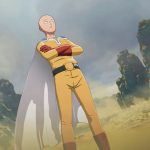 Next Story:
ONE PUNCH MAN: A HERO NOBODY KNOWS to beat PS4, Xbox One, PC this week