Microsoft Corp. this week released new DLC to the Xbox Game Pass for Console and PC.

Dead Cells DLC – The Bad Seed includes The Arboretum, The Swamp, The Heart of the Swamp and a new boss. 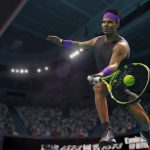