Microsoft Corp. this week said it will release Xbox Series X to retail in holiday 2020.

Xbox Series X, the successor to the Xbox One, is said to feature four times the processing power of the Xbox One X. A custom CPU from AMD includes the latest Zen 2 and next-generation RDNA architecture. Graphics fidelity includes 4K at 60FPS, Variable Refresh Rate, Variable Rate Shading, 8K functionality. The hardware itself can be placed in vertical or horizontal orientation.

Previous Story:
Minecraft: Xbox One Edition No. 5 at UK retail 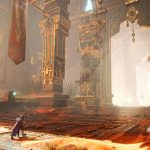