The title is a remake to the sequel originally released in 1999. 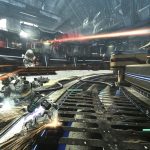