For the week ending Nov. 23, Star Wars Jedi: Fallen Order ranked as the No. 2 best-selling title in the All Formats Chart. 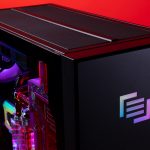 Next Story:
Call of Duty: Modern Warfare falls to $38