In addition, members can purchase the game at up to 70 percent off during the event. 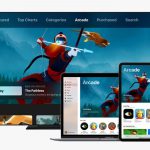