Ghost Recon Breakpoint is a third-person squad shooter set in an open world for land, sea, and air battles against former Ghosts who have betrayed the country.

The final game supports jump-in, jump-out co-op functionality for up to four users. 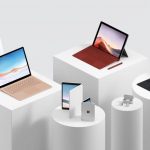