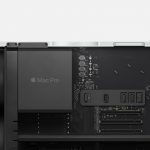 Next Story:
New Mac Pro to be built in Texas