Monster Hunter: World Iceborne Master Edition ranked as the No. 1 software selling 206,156 units for the period. 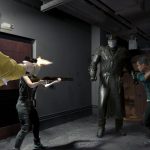 Next Story:
Xbox One sells 65 units in Japan