Samurai Shodown ranked as the No. 4 software selling 16,662 units for the week. 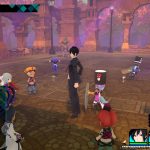 Previous Story:
Conception PLUS: Maidens of the Twelve Stars to trek PS4, PC