PlayStation Plus members can access the beta June 21 to June 24. All PS4 owners can enter the second beta between June 28 and July 1. The base game is not required to enter the beta.

The PC SKU will be released this winter.

The Monster Hunter: World Iceborne Master Edition, which will include the physical base game and expansion, will sell at $59.99.

The Master Edition Deluxe will include a Steelbook case and the Iceborne Deluxe Kit DLC at $79.99. 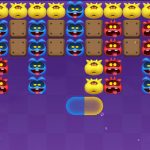 Next Story:
Dr. Mario World to drop to mobile devices