The trailer previews exposition and cinematics from the title. 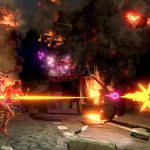