GfK Chart-Track this week said EA Inc.’s Anthem to Sony Corp.’s PlayStation 4, Microsoft Corp.’s Xbox One, and the PC ranked as a top-selling title in the latest retail data from the UK.

For the week ending May 18, Anthem ranked as the No. 14 best-selling software title in the All Formats Chart.

EA in Mar. said it was aware of a crashing issue and is asking users to submit their PlayStation 4 console type, PSN ID, and crash information. 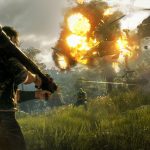 Next Story:
Just Cause 4 Los Demonios DLC to invade PS4, Xbox One, PC