The title was released in Mar. and suffered from glitches and hardware crashes at launch. 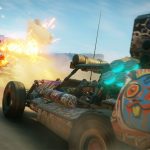