Anthem infiltrates No. 1 sales in Feb.

In Feb., Anthem ranked as the No. 1 best-selling game software across all platforms based on dollar sales. 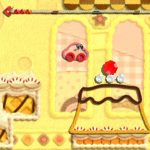