The trailer previews builder and battle options from the final game.

Dragon Quest Builders 2, to be sold July 12, includes an increased number of stacked blocks and multiplayer functionality for up to four users. 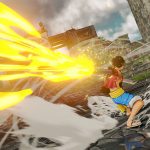