Both titles will be released Feb. 13. 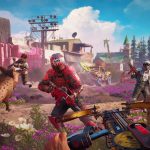 Next Story:
Far Cry New Dawn to drop this week