Between Dec. 17 to Dec. 23, Minecraft: Nintendo Switch Edition ranked as the No. 6 software selling 48,359 units in the period. 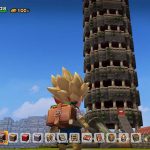