Capcom Co., Ltd. this week said it will release The Witcher 3: Wild Hunt to Monster Hunter: World for Sony Corp.’s PlayStation 4, Microsoft Corp.’s Xbox One, and the PC in a new Title Update.

The Title Update, to be released in early 2019, will include Geralt of Rivera in unique quests and brand new gameplay. 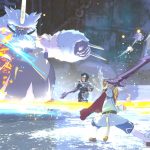 Previous Story:
Ni no Kuni II: The Lair of the Lost Lord DLC to trek PS4, PC this week