Nintendo Co., Ltd. this week said Joker from Atlus Co., Ltd.’s Persona 5 will be included in the Challenger Pack 1 DLC for Super Smash Bros. Ultimate for the Nintendo Switch. 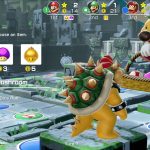