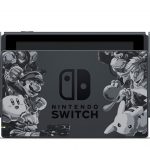 Next Story:
Splatoon 2 No. 10 in Aug. Nintendo eShop sales